Houston, Texas – I received December 2016’s intake and outcome records for BARC (Houston’s taxpayer funded animal control facility).   I calculated the Save Rates, and although they are slightly better than 2015, 6,643  pets were killed by BARC in 2016.

That is nothing to be proud of, in my opinion. 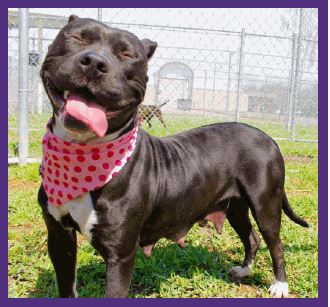 6,643 Animals were killed or lost by BARC (including “Other” animals)

9,149 Dogs and Cats transferred to rescue groups and transporters being paid to ship pets to other states 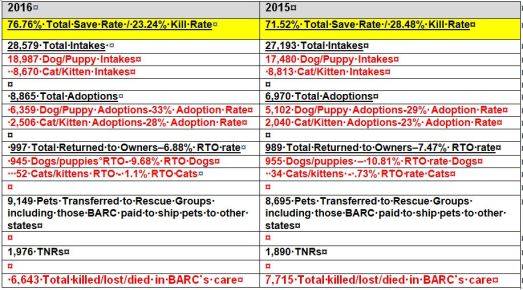 From looking at the huge numbers of pets still being killed, it is pretty clear that shelter leadership could do many things that would increase the Save Rates, both immedately and in the long term.

The first thing, that would have an immediate impact, is a comprehensive offsite adoption program.  This would not only save more lives, but it would also bring in additional revenue to BARC.  Win-win.

Comprehensive is the key word that BARC leadership continues to ignore though. Houston stretches an enormous 623 square miles.  It should be clear to anyone that BARC’s facility on Carr St. is not convenient to a large number of Houstonians i.e. potential adopters.  In addition, some people will absolutely never, ever, go to a kill shelter. This is why comprehensive offsite adoption venues are critical to saving enough lives to end shelter killing.  Nathan Winograd told BARC and City of Houston officials this back in 2009.

When Wingorad worked at the San Francisco SPCA, they had SEVEN offsite adoption venues, EVERY SINGLE DAY of the week, throughout the city.  San Francisco is about 49 square miles.

After quite a bit of searching of BARC’s website, I finally found this calendar at the bottom of a page. 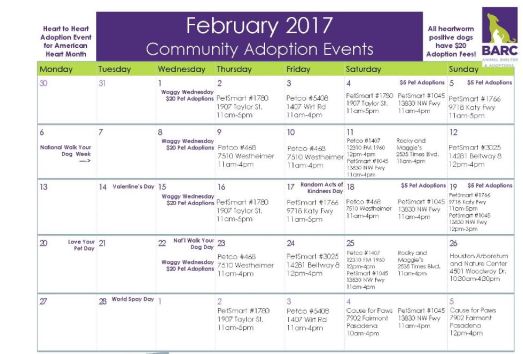 And to make matters worse, 2 of the 4 days that show offsite adoptions are work days for most people i.e. potential adopters.  Yet the hours BARC is available for adoptions is 11 to 4 or 11 to 5.  This means that the vast majority of the target adopting public will be unable to utilize these adoptions because they will be working.

In addition, BARC’s Carr St. facility is open for adoptions when most of the target adopting public would be at work. The below is posted on their website. 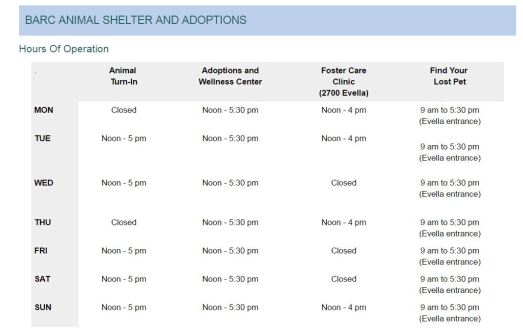 Considering the traffic and the sheer size of Houston, most working people would never be able to adopt from BARC during the week.

This is NOT comprehensively implementing an offsite adoption program.

Making small changes would solve this issue. Simply altering the hours that BARC is open to the public for adoptions, and to search for lost pets, would save many lives and also save money.  It would get more pets into loving homes, or back to their families, and it would save tens of thousands, if not hundreds of thousands, of dollars every year. 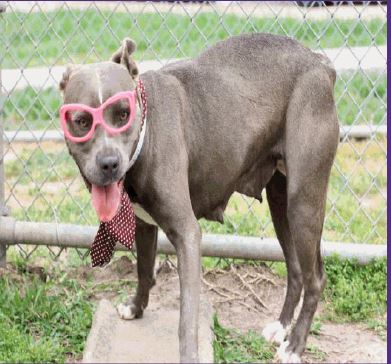 Another adoptable pet killed by BARC in 2016

Something so simple, and free, could have a profound impact on lifesaving.

So, why isn’t it being implemented by BARC leadership?

I calculated that if BARC comprehensively implemented the same Return to Owner program that other shelters implemented, it could free up 8,100 kennels per year for pets who are truly homeless.

It  would also save over $900,000…. because it costs money to intake, process and then kill pets.

Nathan Winograd also told BARC/City of Houston that this program should be implemented back in 2009.  This program would cost little to nothing to implement, yet BARC leadership has not bothered to comprehensively implement such a program. Again, I have to ask why not?

So, the bottom line is that the Save Rate at BARC, has increased slightly from 2015 to 2016.  But more than SIX THOUSAND animals were still killed by BARC in 2016 while simple, cost effective and FREE programs, were not comprehensively implemented.

This is horrendous and inexcusable.  And as usual, this is a shelter leadership issue.

But, this issue has a solution….. a pink slip.

Please SPEAK OUT for shelter pets.  If we do not demand better from our shelters, the killing will never end.

No Kill Houston has made it very easy for you to contact your elected officials, who could increase the Save Rates. They have programmed a link that will  create a pre-written, pre-addressed email that you can send.

Click here to send your email and SPEAK OUT for pets at BARC.