Houston, TX – I recently wrote a blog regarding Bella, a dog that the Houston “Humane” Society claimed should be killed because of the way she looked i.e. she had white fur on her neck so she must be a Pit Bull (click here to read the blog). 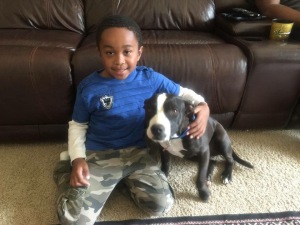 Bella, in her new home

While posting the blog on Facebook, I wrote that 3 “shelters” within Houston’s city limits refused to adopt dogs that someone claimed was a Pit Bull or Pit mix* meaning all of those dogs were automatically killed if a rescue group could not pull them to safety i.e. Houston SPCA, Houston “Humane” Society and Harris County Animal Control.

But, that list has recently changed.  Harris County Animal Control confirmed that there Harris County Commissioners voted to end the breed discrimination at that facility meaning they now adopt out “Pit Bull” type dogs, along with other friendly dogs.

This is good news!

Yes, Harris County AC still appears to be a high kill facility, but at least all dogs will now get a shot at adoption.  And in fact, someone commented on my Facebook page that she had just adopted a dog from Harris County AC that had been labeled a Pit Bull.

So, this is one step forward for Harris County Animal Control and for Pit Bull type dogs entering that facility.

Now both Houston’s city pound and Harris County’s pound adopt out Pit Bull type dogs, but tragically two of Houston’s Limited Admission “shelters” i.e Houston SPCA and Houston Humane Society remain in the dark ages of “catch and kill sheltering” still refuse to adopt out any dog that one of their employees claims is a Pit Bull or mix, meaning those dogs are killed . **

Riley, a dog that the Houston SPCA said is a Pit Bull mix and should be killed

I congratulate the 2 pounds for being more progressive than the Houston SPCA and Houston “Humane” Society on this issue.

I also ask people to consider which practices better represent your values as an animal lover.  We should support only the facilities which represent our values, and continue to demand only the best practices known when it comes to sheltering our homeless pets.

Petie, the “Pit Bull” with The Little Rascals

*”‘Pit Bull’ is not a breed of dog.  It is, according to a leading advocacy organization, “a catch-all term used to describe a continually expanding incoherent group of dogs, including pure-bred dogs and mixed-breed dogs. A ‘Pit Bull’ is any dog an animal control officer, shelter worker, dog trainer, politician, dog owner, police officer, newspaper reporter or anyone else says is a ‘Pit Bull.’”

** Studies show that shelter workers mis-identify dog breeds up to 87% of the time.