Houston, TX – Last month, a woman named Nikki emailed me about a dog named Bella. Bella had been taken to the Houston Humane Society as a stray by an unknown man.  Nikki had lined up a home for Bella with a wonderful family and personal friend, but the Houston “Humane” Society refused to allow Bella to be adopted.

The Houston “Humane” Society had not bothered to do any DNA testing on Bella to verify that Bella had some Pit Bull in her before announcing that she would be killed.  No, some employee just looked at Bella and decided to slap that label on her based on no facts whatsoever.
.

Studies have shown shelter employees mis-identify dog breeds up to 87% of the time. Yet kill shelters, like the  Houston “Humane” Society, continue to place breed labels on dogs and then use those labels as an excuse to kill perfectly wonderful, healthy and treatable, and adoptable pets.

In fact, the Houston “Humane” Society is extremely good at making up excuses to kill pets as the last time that they were transparent with their numbers, their KILL rate was a monstrous 89%!

I posted Nikki’s plea to save Bella on Facebook.  Ninety people commented and most were shocked to learn of the  Houston “Humane” Society’s horrific and deadly procedures.

So, the Houston “Humane” Society knows that the DNA test will show other breeds besides Pit Bull and that is exactly why they do not perform them.  Because DNA tests would prove they are lying about the breed label their “certified technicians” have wrongly assigned to a dog, and DNA tests will prove that the Houston “Humane” Society is killing dogs for absolutely no reason.

So there it is.  The most insane reason I have ever heard to kill dogs.  And I have heard a lot of insane reasons for killing from kill shelters over the years…. but this one tops the list as the most insane i.e.  “white fur on their necks”.

So, all those people working in DNA labs, running scientific tests to determine the breeds of various dogs, have apparently been wasting their time.  They can quit all that wacky scientifically proven testing and just ask the Houston “Humane” Society’s “certified technicians” to look for white fur on dogs’ necks.

My 7lb dog, Riley… with white fur on his neck.  Heaven forbid he ever get into the hands of the Houston “Humane” Society or they might kill him.

And even if Bella was a Pittie, so what?  Multiple studies, including one done by the CDC, prove that a dog’s breed is not an indicator of behavior.  Make no mistake, this is just an excuse to kill adoptable dogs.  There is absolutely no good reason to kill Bella and thousands of dogs just like her.

The Houston “Humane” Society makes up ridiculous excuses like this so they can make false claims to the public that they save all “adoptable” pets…… then claim that dogs like Bella are not adoptable and kill them.

So, the next time someone says “shelters do not want to kill”, remember this story.   Bella’s story absolutely proves that some kill shelters DO want to kill, and they CHOOSE to kill perfectly adoptable pets even when people beg to save them.  And they do this every day of the year.

Petie, the “Pit Bull” with the small children from the Little Rascals show.

After many days, with hundreds of people working to find a rescue group that could save Bella, a rescue group did pull Bella.  Bella was then adopted from the rescue group by the family that originally offered to adopt her…. but who were turned down by the Houston “Humane” Society.

Below are pictures of Bella with her new brother.

This is the dog that the Houston “Humane” Society said must be killed. 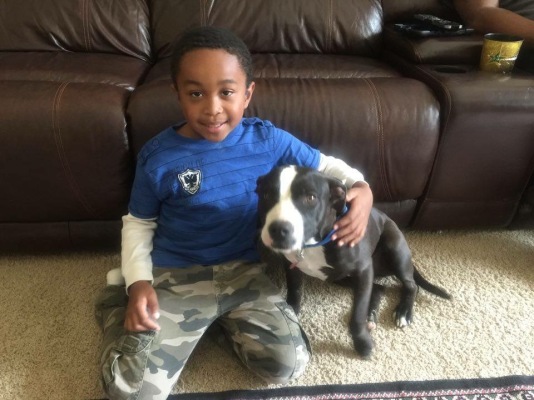 I am also sickened knowing that there are many more dogs who have been, and will continue to be, killed by Houston “Humane” Society simply because of a label that someone made up.

I do not call this sheltering pets.  This is more like a slaughterhouse than a shelter.

Shelters that truly care about saving lives, work hard to save ALL lives.

Real shelters do not kill animals because of the way the animals look…. or if the animals have white on their necks.

If you donate to the Houston “Humane” Society, or any other facility with this repulsive, deadly rule, such as Houston SPCA or Harris County animal control, this is what your donations pay for.

Your donations are being used to kill perfectly adoptable pets even when others beg to save them.

Learn the truth about this slaughterhouse and pass it on to your animal loving friends and family.    More stories about this house of horrors are posted on No Kill Houston’s website here.