Houston, TX – Redemption. The No Kill Revolution in America, by Nathan Winograd, is a book that has arguably caused the biggest transformation in the way hundreds of pounds and shelters in America operate.  This book has  changed the minds of thousands of people who read it and realized that there was a better way of sheltering versus what was taking place in most pounds and kill shelters.   They realized that there was hope.  And this book has saved many thousands of shelter pets because of the people who are now educated regarding how to end shelter killing in their own communities.

When I read Redemption, it completely changed my way of thinking about the pet sheltering industry.   I realized that so many things that the kill shelters and national “humane” organization have told us were completely wrong.  I read Redemption on a flight to and from Minnesota and  I spent most of the flight with my mouth hanging open in utter  shock and amazement….

* amazed that someone figured out how to stop killing all healthy and treatable pets in pounds and shelters more than 15 YEARS ago yet the directors of those facilities were still killing millions of pets every year;

* amazed that I, as an animal lover and rescuer, had not heard about the life saving programs and services from the pounds and shelters themselves;

* shocked that all of the life saving programs of the No Kill model of sheltering were not being implemented in every single pound and shelter because all of the programs are so utterly common sense; and

* shocked at the hypocrisy of the national, multi-million dollar, animal “welfare” organizations that have been fighting against the life saving programs of the No Kill model of sheltering.

Since I read Redemption, I have encouraged every person, who cares about animals, to read it.  As president of No Kill Houston, I have given away more copies than I can count because I believe that the information contained in Redemption is  critically important to ending shelter killing in all communities. 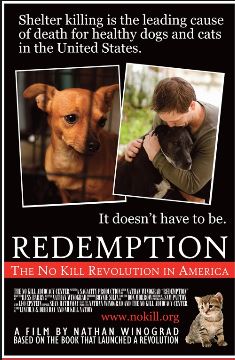 I am happy to say that there is now a film based on this ground breaking book and I am happier to say that it will be shown in Houston!

“Based on the groundbreaking book of the same name, this is the story of animal sheltering, which was born of compassion and then lost its way. It is the story of the No Kill movement, which says we can and must stop the killing.  It is about heroes and villains, betrayal and redemption.  And it is about a social movement as noble and just as those that have come before. But most of all, it is a story about believing in the community and trusting in the power of compassion.”

Admittance to the film and presentation are FREE, but you MUST register first.

I hope that I see you there!

More than anything else, the film is an uplifting story of redemption.

If you wish to receive an email notification each time I write a new blog post here, please click the blue  Follow link at top right corner of your screen. (Note:  The link may not be visible if you are reading this blog in an email.   If you cannot see the link in an email, click the title of the blog to be taken to my blog’s website.)