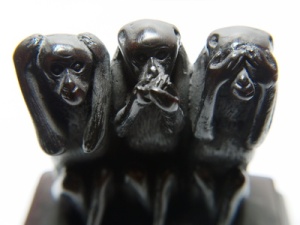 Houston, TX – As reported by the Chronicle, Mayor Annise Parker recently hired some Rice students to come up with solutions to BARC’s miserably low Save Rates.   ARA spokesperson, Christopher Newport is quoted as saying “It’s going to be useful for the council members. What they want to know is, ‘What can we do?’ You can’t really start grappling with that until you’ve got a tool in your hands like what these students provided”.

Apparently, Mr. Newport and Annise Parker have chosen to forget about the 2005 Mayor’s Task Force report which pinpointed many problems at BARC and offered many good solutions.  This lack of memory is stunning considering Parker actually served on the Task Force and she reminded animal lovers and voters many times of this fact while running for election to the Mayor’s office the first time  — for instance in her Policy Brief (see it at this link AnniseParkerPolicyBrief-2009)

Newport and Parker have also chosen to forget that in September 2009, the international, No Kill expert, Nathan Winograd came to Houston and assessed BARC.   Mr. Winograd prepared a 200 page report which details EXACTLY how BARC can stop killing healthy and treatable pets and achieve 90% or more Save Rates.  That was 3 ½ YEARS ago.  Remarkably, Parker even recommended that the city “Listen to the Experts” including Nathan Winograd, in her Policy Brief (linked above), yet she has failed to take her own advice.

If Annise Parker had hired leadership dedicated to saving lives when she first took office and required that BARC vigorously implement expert, Nathan Winograd’s recommendations, BARC would be well on its to No Kill by now.   Instead, BARC’s Save Rates have DECREASED every single year that Annise Parker has been in office.  EVERY SINGLE YEAR.

For those who are not familiar with Nathan Winograd, he created the first Open Admission, No Kill shelter in the US, which saved all healthy and treatable animals entering their doors.   Only the irremediable suffering were euthanized (this is the true definition of euthanize).   His shelter was responsible for animal control for 8 municipalities, yet they still saved 90% or more of all animals entering their doors.

Since then, 90+ other Open Admission facilities, representing approximately 300 communities, have followed the same No Kill model of sheltering (called the No Kill Equation) and those shelters have achieved the same successes.   When shelters vigorously implement (i.e. not half-assed as is the case at most kill shelters) all of Winograd’s  recommendations, they stop killing too.

In addition to having a step-by-step No Kill guide for BARC, BARC employees attended the national No Kill Conference in Washington DC in 2012.   Present at this conference were people who have actually stopped shelter killing in their communities, and they taught classes on how they achieved their successes.

So, Annise Parker and BARC leaders know EXACTLY what needs to be done at BARC to stop the killing  — the tools are already in their hands, and have been there for over 3 1/2 years.

But, instead of using those tools, as Parker promised and recommended, she has chosen to ignore them and asked some college students to come up with “more” solutions.

The sheer insanity of choices made for BARC is simply stunning.

Don’t get me wrong,   I’m sure the students’ motivations were well meaning.  But did they research the many other Open Admission shelters that have already reached No Kill?  I have not seen the report, but the Chronicle article does not mention many of the crucial components of the successful No Kill model of sheltering, so it does not appear that the students researched what is already working.  So, essentially the students’ solutions are merely a guess.

Why did Parker even ask college students to come up with solutions in the first place, when she already has the solutions and all the tools necessasry to stop shelter killing?

The answer?  Asking the college students to come up with solutions is just a “bait and switch” charade and nothing more than the Mayor’s attempt to divert attention away from the fact that she has totally failed keep her No Kill promises.   She has never bothered to require that her employees do their jobs well and implement the solutions that have already been proven to work and already in her hands, so she asks someone else to come up with “other” solutions.

Annise Parker has repeatedly promised that she would do everything in her power to transition Houston to a No Kill city.

The only thing that Annise Parker has to do is DEMAND that her employees do their jobs and vigorously implement all of the recommendations in Nathan Winograd’s assessment report.

It is foolish, wasteful and dishonest to squander time, money and lives by continuing to refuse to implement proven solutions, and by asking others, with absolutely no life-saving shelter experience, to “guess” about solutions.  It a reprehensible and reckless use of our tax dollars and a reckless loss of precious lives that:

There are a lot of things that BARC leadership and Annise Parker could be doing at this moment to save hundreds more lives every month, that would literally cost the city absolutely NOTHING, yet the Mayor and BARC leadership continue to refuse to implement these programs and services.

It doesn’t take a rocket scientist to see where BARC’s problems lie.  It is the same problem that has plagued BARC for years — LEADERSHIP.  Annise Parker and BARC manager, Greg Damianoff that just do not care if BARC stops killing.

As I have said before, that problem could be solved with a pink slip.

I urge everyone to demand that Annise Parker (and your city council member) require BARC to vigorously implement the recommendations in Nathan Winograd’s 2009 assessment report.  Call, write letters, fax and/or email them.   (Their contact information is linked here.)

If you just don’t have time to call or write, I have created a petition that will send them an email each time someone signs.  You can find the Petition here.    Please SHARE it with all of your friends and family.

If we all do not speak up and demand better, BARC and city of Houston will continue the “business as usual” as a high kill pound forever.    This is an election year for the mayor and city council members, so remind them that you vote.

Until a few years ago, I too believed that there was a pet overpopulation problem.  After all, I have seen the large numbers of animals at shelters, and who would believe that an animal shelter would kill thousands of animals every year if there actually were enough homes for all of them?  The caring and rational people who work at animal shelters would not do such a thing……. would they?

The truth is that pet “overpopulation” is actually a myth.  It does not exist.  I know this sounds heretical to many people especially to those who have fostered many animals, or to the people who watch animals being killed by the thousands at shelters every year. The first time that I read that pet overpopulation was a myth on a book cover, I thought it was crazy.  I am sure that people felt the same way the first time someone suggested that the earth might actually be round, not flat.  It is hard to change our belief system when we’ve been taught one thing our entire lives.  But, people finally realized that the earth really was not flat after all, that people were not sailing off the edge of the earth and people will soon realize that pet overpopulation is a myth as well.

But, let’s look at the numbers to make some sense of what the true facts are.   According to a national study done by Maddie’s Fund and the Humane Society of the United States, 23.5 million people in the US will get a new pet each year.  Some of those people have already decided where they will get that pet i.e.  they will adopt from a shelter, go to a breeder or get a pet from free to good home ad etc.   However, 17 million of those people have not yet decided where they will get their new pet.  So these “undecideds” are the homes that are up for grabs.  These 17 million people could be convinced to adopt.*

Today, between 3 and 4 million animals are being killed in “shelters”.   So it’s pretty clear that the “demand” for pets each year (17 million) far outnumbers the “supply” of animals being killed in shelters (3-4 million).

And the supply of adoptable shelter pets each year is actually even less because a large portion of that 3-4 million being killed are actually lost pets that should be reunited with their owners.   For example, Washoe Co., NV animal control returns 65% of pets to their owners.  Conversely, most shelters in the US average a return of only about 5%.  If Houston’s animal control i.e. BARC would utilized the same Return to Owner program as Washoe Co. with the same success, it would save the lives 8,100 more animals every year; that’s 8,100 animals that BARC would not need to adopt out or put in foster care and 8,100 empty kennels for the animals that truly are homeless.  It is also a savings of $972,000 every year which could then be directed to programs like free spay/neuter or a Help Desk to keep animals from being relinquished by their owners.

In addition, that 3-4 million “supply” could be further reduced if all shelters TNR’d (trap, neuter, released) feral cats instead of killing all of them, as many shelters do.

That 3-4 million “supply” could be reduced further still if shelters had pet retention programs that kept many of those animals out of the shelter in the first place, as mentioned above.

So we can see that adopting out all animals entering shelters is doable.  And the fact is that it is already being done in many communities.  If pet overpopulation really existed, there would be no open admission, No Kill shelters.  They could not exist. But, they do exist.

So let’s break these numbers down and get a perspective on what it means for Houston.

According to the U.S. census, there are 310,895,000+ people in the U.S.  As we discussed above, 17 million people who will get a new pet each year, have not yet decided where they will get that pet.  Those “undecided” new pet owners equal about 5.4% of the U.S. population.

The latest census shows that Houston has just under 2.2 million people.  The “undecided” new pet owners in Houston would equal about 118,800 people.  That is 118,800 people who could be convinced to adopt their next pet.

This means that there is no pet “overpopulation”.  It just means that the 80,000 pets being killed in Houston shelters each year could be saved if they were better introduced to the people who would be willing to adopt them.

I’m also not saying it is easy to save all healthy and treatable pets entering shelters.  To the contrary, it is hard work.  But therein lies the true heart of problem ….. saving all healthy and treatable pets is hard work and most shelter directors in the U.S. still refuse to do everything necessary to save them.  Continuing on the same path of “save a few and kill the rest” is easier.  Continuing to blame the public for pet “overpopulation” is easier.

That overpopulation problem could be solved fairly quickly…. with a pink slip.